Regions that regularly or seasonally experience temperatures below the freezing point of water will have their roads treated with halite, more commonly known as rock salt.

De-icing vehicles will spread salt prior to predicted snowfall or when temperatures are likely to fall below freezing where roads are already wet. Water normally freezes at 32°F (0°C), but by adding a 10% salt solution, this can be lowered to 21°F (-6°C). A 20% solution will further reduce the freezing point to 3°F (-16°C). If the ice on roads has already formed and the temperature is below 16°F (-9°C) then adding salt will have little effect due to the difficulty of the salt penetrating the structure of the ice to dissolve it. Where snowfall is forecasted as a storm, a brine solution may be applied to the surface beforehand to delay or prevent the formation of ice and snow. 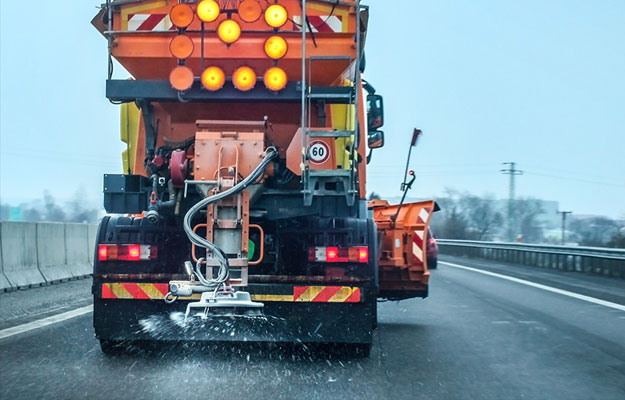 Traffic passing over the mixture helps the process, moving and mixing the saline solution within the thawing ice. The thawing process can take a considerable time if there is little or no traffic flow. Snowfall on top of treated ice begins to melt, which is also assisted by traffic movement.

After a prolonged cold spell with warmer air approaching a phenomenon known as freezing rain can occur whereby snow passing through the warm air turns to rain before passing through a thinner layer of cold air above the earth’s surface. The moisture cools to below freezing point but the droplets of water do not actually freeze until they hit the road surface, coating it in a film of ice. Coated salt crystals are rendered almost ineffective until the air temperature rises again and the melting process can begin. Salt spreading under these conditions can be treacherous due to little vehicle traction.

Decisions as to whether road salting should take place are made daily, based on local forecasts and on predicted ground temperatures rather than air temperatures. Normally salting will take place when road temperatures are predicted to fall below 34°F (1°C) and ice could form. Generally, weather stations around the region are monitored and ground temperatures recorded. On a daily basis, road and air temperatures are checked to predict forthcoming conditions on whether to salt or not, along with salt stock level checks. In conjunction with data, experience and knowledge are shared as part of the decision-making process.

Salting vehicles are typically deployed before peak hour traffic in the morning and after peak hour traffic in the evening. If it is raining prior to salting, a decision may be taken to delay the run. This is to ensure the salt is not washed away. Salting routes are usually categorised into primary and secondary whereby only when the primary routes have been completed will the secondary routes be addressed to improve the road network. A priority scoring system normally defines the order of salting routes including gradients, dangerous bends, traffic levels, residential access and bus routes. Prioritising the need for salting takes into account the cost of rock salt, vehicles and fuel, labour and the environmental impact such as that to plants and salted water entering into the drainage system.