Drones are un-piloted aircraft or missiles controlled by an operator from the ground. They were originally designed for military reconnaissance purposes, away from the public eye.

Their use has predominantly been since World War II when unmanned jets and US Air Force gunnery targets such as the Ryan Firebee were developed. During the Vietnam War, the BQM-34A flew several thousand missions, launching AGM-65 missiles, controlled by an operator via a camera in the nose of the drone. The term UAV or Unmanned Aerial Vehicle is also widely used today with the technology adopted in many sectors including scientific, commercial, recreational, agricultural, product deliveries, aerial photography, policing and surveillance. 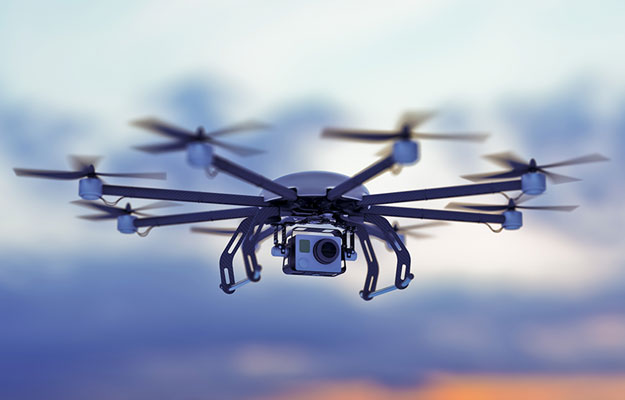 Due to their remote operation, drones have found a place in industries where worker safety, speed of response and task flexibility are important. These include search and rescue, law enforcement and fire fighting. Missing persons can be located more quickly than via traditional methods, especially following disaster events such as earthquakes, floods or avalanches. The police make use of drones in their search for suspects during the day or night. Fire fighters utilize them to see through smoke, track fire progress and seek hotspots to prevent flare-ups.

Where large areas have to be covered as rapidly as possible, conventional search and rescue missions require significant manpower and resources. Using payloads such as high definition video cameras, a light source or infrared imaging, deploying drones to examine the ground from above considerably reduces the time to locate missing or injured persons, prepare, and launch a rescue.

Surveillance exercises take many man-hours of unproductive waiting. Drones allow Police to view places and things that elude fixed cameras. Large crowds often need a Police presence on the ground. With the ability to monitor sporting events, concerts, carnivals and demonstrations from the sky, drones allow the response time to potential situations to become much more efficient. In situations whereby law enforcement officers need to travel at high-speed through traffic, there are always risks of public safety and the potential for accidents. By controlling a drone ahead of them, information can be passed back to mitigate the risk of accidents. Additionally, drones can survey areas such as tunnels, bridges and other structures. They can even fly inside buildings relaying details by video for further investigation.

Drones can undertake an important role in developing the best initial response to disasters as well as determining when impacted zones are safe to re-enter. Forest fires can be tracked and the aftermath of other natural disasters can be reviewed safely. Using 3D mapping of potential target sites, first responders can familiarize themselves with the landscape before arriving on the scene to an emergency such as an active shooting incident.

Drones are integral to CNIguard’s mission to deliver world-class utility asset management solutions. CNIguard welcomes opportunities and partnerships to provide readiness and response for public and worker health, safety and security relating to the protection of critical national infrastructure. Contact us to discuss how we can work together.